About a week and a half ago I sat down to do a blog entry. It was a great time to preview one of our cruiser days and talk about the week ahead. As often happens here at camp, I got distracted a few times over that night, forgot about the blog entry. This happened about three times over the ensuing week and a half, and now, here we are on the eve of North Star’s 69th Pow Wow Day. So I’ll catch everyone up.

Typically, the 5th/6th weeks of the summer tend to be a bit more “normal”. We have regular days, not as many special events, and we’re really able to enjoy days of activities and cabin bonding. This summer, however, we got a jump start on special programs, leading off with College Days. Exclusively for our senior village campers, College Days is a three day period where the oldest campers are split into four teams. With no assigned captains, the teams govern themselves as everyone participates in a series of events. Many of these are sports related, but we also have things like waterskiing, bowling and, of course, the cook-off.  Teams also make plaques, have a mascot and cheer competition and by the end of the three days, the seniors could sleep all day if we allowed them. 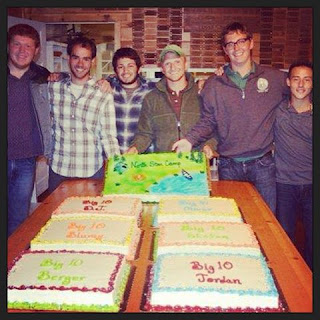 As College Days were ending, it was time for us to honor a few of our long timers. On Friday we first had the opportunity to recognize Bill and Patty Lisberg. Bill has been camp doctor and with Patty, they’ve been coming up for 20 summers. They’ve actually started as NSC post campers in 1984 and we were thrilled to name the waiting room in our health center “The Lisberg Lounge”. Were looking forward to another 20 years with Bill and Patty.

That evening was our “Big Ten”, a time to honor those folks who have spent ten years at North Star. We had a full crew to honor this year, recognizing counselors Michael Berger, Zach Blumenfeld, Stefan Granados, Dylan Jacobs, Jordan Reiff and Oliver Rockman. We had a fantastic group that traveled up to share in the event with lots of family members and past campers/counselors heading to be in attendance. It was a great night with some fantastic stories.

Following the Big Ten, the action continued. Over the weekend we welcomed in our rookies. Its fun to have prospective future campers spending time at camp for more than a few hours. Despite some less than ideal weather, the rookies loved playing dodgeball, regardless of the precipitation. After the rookies departed, it was time for the Green-White Egg Marathon. The marathon is an all camp event that takes about two hours. It starts with a relay race and over the course of the afternoon, everyone participates in at least one event. With the egg marathon, however, each team travels with an egg, and if the egg breaks, a runner must go and replace the egg. This year, as usual it game down to the boil water boil and a close marathon as usual.

As if that wasn’t enough, we headed towards Pow Wow Day as captains and teams were announced at the start of the week. And if that weren’t enough, we sent 70 campers to Camp Nebagamon for the annual bi-camp competition yesterday. Campers competed in archery, canoeing, cross country, chess, riflery, sailing, swimming and tennis. It was great to see our friends at Nebagamon and we thank them for their great hospitality.

Saturday is Pow Wow Day and we won’t make you wait another week and a half for updates. The summer is flying by and we’re looking forward to an amazing final week of the session!