We in the North Star offices take March Madness pretty seriously. There is no doubt that the first weekend of the tourney is amongst the greatest sports events of the year and while North Star takes pride in its non-competitive philosophy, we all love the non-stop action of the opening round of the NCAA Basketball Tourney (and no, the “play-in games” don’t count as the first round…). This year Leb was able to land tickets to the regional games played in Tucson and he also made me promise not to schedule any staff interviews during Friday’s University of Arizona game.

On Friday those of us who live in Chicago gathered at Andy’s apartment and created quite an impressive viewing arena/work space. Ahead of the games we made a quick trip to Costco with alum Mike Blumberg to prepare ourselves for the day. When it came to televisions, though, we were able to set up three scre 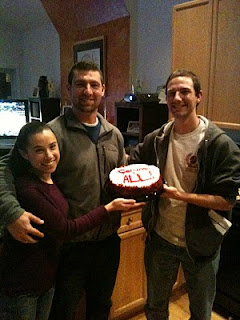 ens for three different games. The highlight was the NSC projector which we focused onto the wall, allowing us to watch a game streaming from the internet at a whopping 72 inches. We were joined by Andy’s wife Vickie (who also spends about 1/2 the summer at camp), counselor Ben Mizel as well as Mike’s girlfriend Sarah and alum AJ Bayard.

When we were at Costco, we decided that we had purchase a birthday cake since it wasn’t only gameday, it was also Ben’s 22nd birthday. Of course, when you go to Costco, you need to be prepared to buy a cake for dozens, but that was okay because we realized that there was ample cause for celebration. Not only was it Ben’s birthday, but just the day before he finished his last college final and was now a graduate of the University of Chicago. Also on Thursday, Vickie had matched at Lutheran General Hospital, where she’ll be spending her residency. But wait… there was more. Joining us later in the evening was NSC Alum Marc Siegel and his fiancee Blair Sterling who we found out this week were newly engaged.

We had a great turnout in the NSC March Madness contest. This year we had 148 campers, staff, parents and alumni post their picks. At the end of the first round many of our participants had very impressive showings. We at North Star don’t like to pat ourselves on the back, but it is possible that at the time of the writing of this Leb’s Ramblings one of the North Star Associate Directors (not named Andy) may be atop the leader board with 29 of 32 correct picks. Current campers Asher Borstein and Simon Dinkin along with alums John Lee and Robby Rutkoff are hot on the heals of said Associate Director (not named Andy).