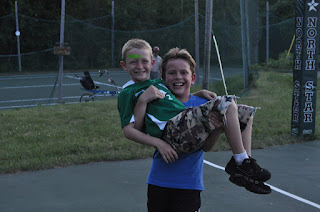 One of our goals at camp is to get campers active. While we have to spend our first full day doing things like swim tests and camper physicals, we make sure that everyone is active, playing games like continuous dodgeball and all camp capture the flag. We jump right into the full program on day two. The first night that our campers arrive they complete their activity requests, and less than 36 hours later, they’re on the program climbing, waterskiing and playing.
Day one of the activities was great. Inclement weather held off and we were able to get in a full morning of activities. We did have to go into a rainy day program in the afternoon, but we took advantage of that time to make sure all campers learned the basic North Star games like spoons, euchre and mafia. The evening was our staff introductory talent show. At North Star talent is pretty loosely defined, but our campers were more than a little bit entertained by skits, songs and other random performances.
Today the sun was out and with the second day of our full program, our campers really start getting into a groove. Things become routine for new campers and everyone starts progressing on their first set of activities. Its so much fun to see a camper get up on skis for the first time or actually hit the target down on archery. Our evening program was a great night of field games, organized by several of our counselors. Camp was split into four groups and everyone rotated amongst four different games. For our campers, the games were just fun, but many of them had a deeper purpose. My favorite one was Alaskan Baseball, where two teams were pretty much running all over the field, but in the meantime, they were learning names of everyone else on their side. 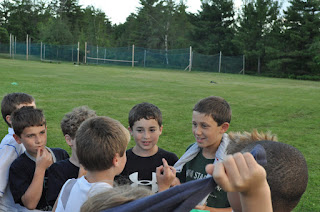 Over the last two days our staff has really helped get the summer off to a successful start. Organizing great evening activities is just the start. Making sure that campers are engaged and having fun on a rainy day can be challenging. Our counselors really stepped up! To say that we’re proud and impressed with our staff is an understatement.
We also have four cabin groups out on trips. Our Pine and Manor cabins left yesterday bright and early for the Canadian wilderness. They hit the lakes of Quetico Provincial Park this morning. Cabins S-1 and S-2 left today for the Porcupine Mountains in the upper peninsula of Michigan. The trips will continue with I-4 heading out on the Flambeau River tomorrow.