Each summer, there comes a point as we near the end of July where we turn up the heat and our “regular days” start getting filled with more special programs. Our regular days allow campers to really focus on their activities and get settled into a groove. We’ve hit that point for the summer of 2012 where special programs come left and right. 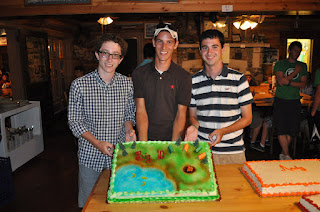 The fun started on Friday following our weekly services at the council ring. As Andy called down those who had been at camp for ten years or longer, a van full of visitors came up honking signaling the Big Ten. The Big Ten is a roast of sorts where we honor those who are spending their tenth summer at North Star. Its quite an achievement to commit that many summers to camp, and for so many of our Big Ten honorees, we’ve seen them grow up from campers to counselors.

The Big Ten is a surprise and very few people in camp know when the day will be, so as staff unroll a banner, the Big Ten guys don’t know if its actually the Big Ten or not (we often have fake Big Ten’s to build up the suspense). This year we honored counselors Willie Goodman, Andy Rodheim and Andy Stern. All three began at North Star as campers and we’re thrilled to add them to the list of men and women on our Big Ten plaque.We had lots of great visitors come up for the Big Ten and we thank them for their efforts to make it to camp this weekend.

As Saturday rolled in, so did several “rookies”. Each summer we hold two Rookie Weekends. These allow prospective campers and their families to come into camp for an extended visit. While we do tours all summer long, Rookie Weekends allow the parents to get their own tours of camp while the prospective campers got to participate in activities on both Saturday and Sunday.
After a Green-White Series on Saturday night, or campers awoke to what they thought would be a normal day. In the midst of morning announcements, Andy walked into the lodge in full lumberjack regalia. After he repeatedly screamed “Yo Ho!” (a lumberjack cheer), constantly interrupting morning announcements, we broke the news to camp that we’d be taking them to the 53rd annual Lumberjack World Championships. The Event is an afternoon full of competitions in lumberjack and logrolling events. The LWC used to be televised on ESPN. North Star always has an interest in supporting New Zealand native Jason Wynyard, one of the competitors. Jason visited camp a few years ago and showed off some of his tools and put on a display for camp. Jason is tops in the sport and this year he won his 14th consecutive All Around Men’s Championship (as well as winning several individual events). 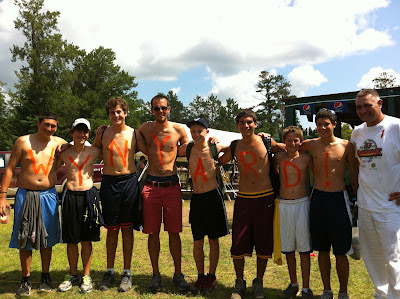 The day wasn’t finished yet, however. We returned to camp and after dinner we played Glen’s Game. Glen’s Game is a camper favorite, where there are four areas that campers must get to. Those four areas, however, are heavily guarded by counselors. Campers have to use speed, smarts and other skills to get into a coned area. Once there, they get a mark and then head to another area.
Tomorrow is yet another day, and one loaded with special programs. With a regular morning in store, the afternoon will bring the Green-White Egg Marathon. Evening program will be an all camp campfire which will surely feature a talking contest and “I see a baaaar”. Our campers were able to persuade Andy to call for a half hour later tomorrow, so we’ll sleep in before another great day in the Northwoods!