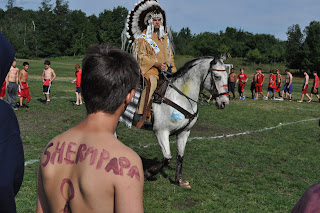 The normal flow of the summer gives way to lots of special programs over the last week of camp. While the “normal” days are never really normal, the last week is jam packed with special days, big programs and the eventual process of saying goodbye to friends new and old.
We kicked off the big week on Saturday with our 69th Pow Wow Day. The entire camp was split into four teams, representing the tribes of Hopi, Yakima, Flathead and Omaha. Just about a week ago the 12 captains or chiefs were announced. These captains, four per village, were selected by the counselors to lead the teams. With their medicine men (counselor advisers), they choose their teams, assigned everyone to events and helped build great excitement and energy.
The day led off with a traditional wake-up from the medicine men. They went from cabin to cabin to rouse all of our campers. After our opening ceremonies, campers went off with the rest of their villages for leg wrestling. Before lunch, we had two series of events, and when the scores were revealed half way through the day, Omaha had modest lead. 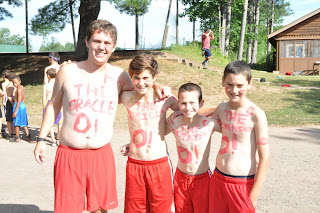 After lunch, the counselors play one-pitch softball for eating order for dinner. One-pitch is a unique in that each batter literally gets one pitch. If the batter looks at a strike or fouls a pitch off, they’re out. If they take a ball, they get first base. Before the third series, camper and staff running relays as well as camper and staff tug-o-wars got the entire camp back in action. Third series saw lots of canoeing events and fourth series all takes place at swim point, with swim relays, log rolling and waterpolo.
With campers and staff alike exhausted after a long day and filled up on a great dinner of bar-b-que beef sandwiches and corn, we all headed up to the Council Ring for our closing ceremonies. This is when we have the inevitable stall. What the campers fail to realize is that what makes the stall is the reactions of the campers. If they would just sit quietly, Andy would be forced to read the scores. Ultimately, after about 30 minutes of camper induced chants, cheers and shenanigans, the scores were read. Yakima came from being in 2nd place at lunch to win the day, but in the end, it was about who had the most fun.
Pow Wow Day is just the beginning. As we speak, we’re about to begin Espionage, where the campers quietly sneak around camp trying to accomplish certain objectives under the cover of night. Tomorrow sees us sleep in for Lazy Day followed by the camper counselor hunt and casino night. Before the week is done, we’ll have camper counselor day, our final staff show, a request program as well as several other events to wrap up what has been an amazing summer.