We truly cannot say enough about the energy of our staff, and today was just another great example. For the yesterday’s Cruiser Day, the staff organized “Middle Ages Day” (pun intended) for our Intermediate Village. 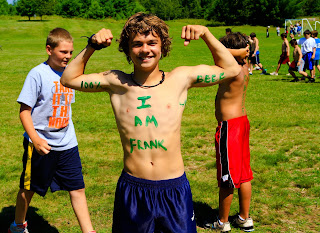 From the limitless brain of Village Director Ben Mizel came a day of events full of imagination, creativity and fun.

The village was divided into 6 teams – Vandals, Normans, Saxons, Franks, Vikings and Visigoths – and they each actually learned what that meant! They kicked off the festivities with a double-elimination Braveheart tournament. Braveheart is a game where you lock hands and use your pointer-finger as your “sword.” The first person to make contact with the other person wins the duel.

Then the teams proceeded to the theatrical portion of the day, which involved the jesters presenting their team’s flag, a ballad and a dance. All of this was judged by our damsels in distress! From there it was onto a quest for the Holy Grail, which was a detailed scavenger hunt that even included a William Tell archery shoot.. . sort of. They did shoot at an apple, but not off the top of anyone’s head! 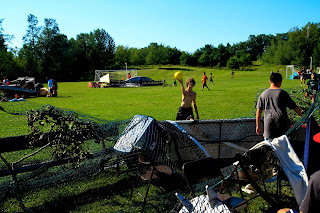 Last, but surely not least, was The Seige! The teams had spent parts of the whole day building forts on the middle of the athletic field. They used everything that wasn’t nailed down. Canoes, tables, tennis nets, soccer goals, chairs, and more. The only criteria was that each fort had a “mast” on which you could balance a ball. The other teams would then try to knock of that ball with dodgeballs of their own. There really is no way to describe it other than organized chaos.

They had a day for the (middle) ages!