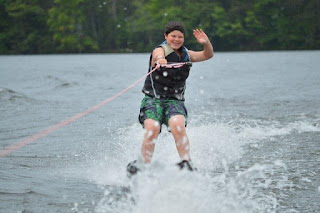 From the time that the campers arrive on Monday afternoon until they start their first instructional activities, less than two days pass. Within about 42 hours, campers will step off a bus and then onto a football field, tennis court, fishing boat or any of our other activity areas. Its important for the campers to hit the ground running, and this is why the day that campers arrive, we make sure that there is some type of action for them to get out, run around, and have fun.
We also want to make sure that they start getting into the rhythm of the summer and get accustomed to a consistent program and schedule. Of course, before this happens we have to do things like swim tests and camper physicals, but on the first night, we get campers thinking about the cool stuff they get to do by having them complete their first set of activity requests. As we head into Friday, campers will be completing their first three-day activity set.
Beyond the main camp program, the last few days have been filled with action to make sure we jump start the summer of 2013. Tuesday night we played our first game of capture the flag for the summer. Wednesday morning we bid adieu to the Pine Manor campers (our oldest campers), who left for their nine-day trip to Quetico Provincial Park in Southern Ontario. We also sent two trips to the Porcupine Mountains in the Upper Peninsula of Michigan as well as a river trip down the Flambeau. Wednesday was the first day of programming and evening program allowed us to introduce all of the great men and women that make camp run in our opening Staff Show.
Rain headed our way on Thursday, but if it had to rain, the timing was pretty good. We were able to get in all of our instructional periods before bringing the campers inside late in the afternoon. Our Junior and Intermediate village directors were able to come up with some fun games to get us to dinner, when it looked like we’d be able to resume outdoor programming. The weather had other ideas, however, and we had to come up with a great indoor evening program. 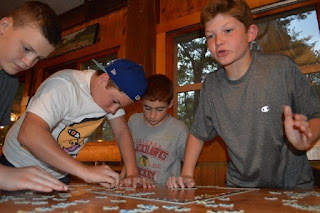 If we told you that we were able to create a fun filled night with lots of energy by having campers assemble puzzles, you’d thing that we were lying. Several years ago we bought about 20 jigsaw puzzles for a rainy day event. With the right build up, some fun competition, and the help of our tremendous staff, we had our first cabin puzzle challenge. Each cabin group got to choose a puzzle from our collection and they took on each other to see which cabin would be the first to complete their puzzle. Older cabins had to select from larger puzzles and we also threw in few curves. What resulted was an evening of part puzzle building, part dance party and a ton of fun.
The rainy day puzzle contest shows the importance of great staff as well as the importance of turning something fairly insignificant into a big deal. We could have handed out a bunch of puzzles, left out the fun announcements, crazy build-up and other random silliness, but the event would not have had nearly the same level of excitement and participation. Our staff were vital in both getting our campers into the contest and keeping the momentum flowing. Its pretty clear that we’ve got a special group of counselors!  Several cabins continued to try to complete their puzzles, even after the contest had ended. All of this was proof that at camp, you can turn something as basic as assembling a puzzle into a tremendously fun evening program.