We woke up to a beautiful Northwoods morning with the hot sun burning the mist and dew off of the fields. It had the makings of a great Pow Wow Day right from the start, and it was. The entire camp was divided into four tribes – Apache, Hunkpapa, Mohawak and Sauk Fox – for a day of spirited competition. 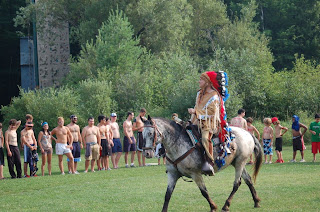 After breakfast, we had our traditional Pow Wow day ceremony where the whole camp marches down Villa Road onto the athletic field following Leb on horeseback. After that the tribes separated by village for leg wrestling. Each village narrowed down to a final four and eventually a winning leg wrestler. There are always twists and turns during the leg-wrestling competitions, and this year was no exception.

After leg wrestling, we had two morning series of events. One of things that makes Pow Wow Day so special is the diversity of the events. 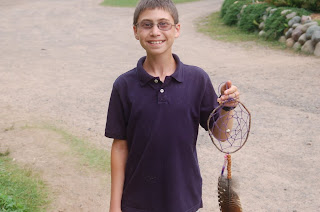 There are plenty of sports as well as events like climbing and archery, however there are other specialty events that really give all of our campers an opportunity to excel. Campers compete in events like orienteering, scavenger hunt, not to mention several Arts and Crafts and canoeing events. Our campers have so many talents and it’s neat to see them all on display.

Lunch on Pow Wow day is a unique meal as well. Unlike our typical meals where the dining hall is filled with enthusiasm and cheers, this meal is silent, and campers and staff have to figure out how to communicate for the entire meal without talking.

Though the meal itself was silent, the sky was not. While we were at lunch, the clouds opened up it began to pour. So we adjusted our plans for the afternoon and Dan and the advisors planned a great program of indoor competitions that included paper football, a spelling bee, card games and more. The advisors also took part in a bingo showdown to determine the eating order for dinner. Mid-afternoon the sun returned and so did our regularly scheduled activities. We started off with run-offs and the tug of wars, and after dinner we were able to get in all of our swimming events and water polo. 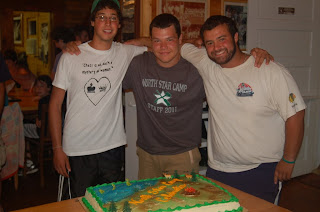 Upon the conclusion of all the activities, the whole camp made their way up to Mike Hall where they were awaiting the results of the day. But before that could happen, Leb was interrupted by the Big 10! Each year, we take the opportunity to recognize the people who have given a whole decade’s worth of summers to North Star. This year we celebrated the accomplishments of three great counselors – Scott Goldberg, Craig Morelli and Michael Skaletsky – who are all at camp for their 10th summer.  We told some great stories about the guys and then made our way to the Lodge for cake.

Oh yeah, and we did announce the scores after all. But as the guys like to cheer here, “It Just Doesn’t Matter!” It was a great day for all of the campers and staff!