Those of us who have been at camp for more than a few years sometimes have a hard time realizing how long some of our “traditions” have been around. To campers, the concept of “that’s the way its always been” often may refer to something that has only been a part of camp for four or five years. College Days is certainly in that category. Some of us were around for the first College Days and at first it seems like something that is relatively new, and while we were discussing it we realized that its actually been a part of our program for 13 or 14 years. 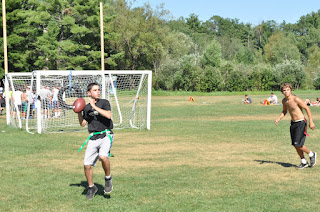 College Days was started in the late 1990’s by Senior Village Director Seth Katz. In response to the need for more specialized programming for our oldest campers, a three day series of events was created. During this time, our oldest village does not participate in any of the programs that the rest of camp does, with the exception of meals. From the start of the day until nightfall, our 13-15 year olds have programming exclusively for themselves. From the start of College Days, the village is split into four different teams. There are no captains, giving the team the opportunity to create its hierarchy and allowing the opportunity for many to lead. Each team decides what college they want to be for the duration of the three days.
Initially the programming was almost exclusively athletic based, with one main exception, the cook-off (we’ll write more about that tomorrow). Over the years, our Senior Village Directors have added their own touches. College Days has seen the addition of a bowling tournament, trivia challenge, team cheer contest and plaque making.
College Days 2012 kicked off today with much excitement from the Seniors. They look forward to this all year and it undoubtedly marks one of the highlights of their summer. While in years past some of the colleges chosen were the typical powerhouses, in recent years, the teams have opted for non traditional schools with really fun mascots. This year’s teams are Bowdoin (Polar Bears), University of Alaska Southeast (Humpack Whales), Bard College (Llamas) and St Francis Xavier University (X Men). 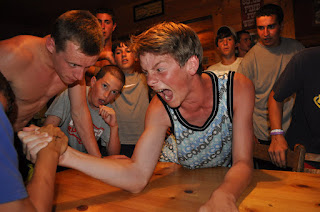 The opening day’s activities started with traditional games of softball over first and second period. Post lunch, there each team split up to send participants to archery, riflery, swimming and waterskiing. Football consumed much of the afternoon before teams were given some free time to plan for things like the cookoff, mascot costumes and cheers. The teams participated in a wide ranging trivia contest in the evening, with NSC trivia as well as questions about college mascots, pop culture and general history. Capping off the evening was arm wrestling. While certainly a display of skill, it was an even more entertaining to see all the facial expressions.
We’ll pass along more updated as College Days progresses but after one day, the Seniors are having a great time!