Ben Weil is one of two sets of twins that are on the North Star Staff. A native of Denver, CO, he’s back for his eighth summer. Ben is a junior at the Denver School of the Arts. Affectionately known a as Bdubs (or Bdub$), he staged managed his  schools performance of Bus Stop, which opened on April 10th. He’s Bdubs because of his musical talents and he’s currently recording my full length rap mix tape “Triple Threat” which will be released in late 2013.

Ben has been busy starting his search for a college that and a few of our counselors have been pushing Michigan State. Besides his musical and art talent, Ben is a big basketball player and fan. At camp and he’ll be instructing arts and crafts as well as basketball.
Favorite Tombstone pizza type: Cheese
Favorite activity at camp: Basketball/arts and crafts
Your three favorite movies of all time: Ferris Bueller’s Day Off, Batman Dark Knight Rises and Toy Story

If you could have lunch with any two people, dead or alive, who would they be?: Sloan Peterson
What is your dream job: Rapper
Little Known Fact about yourself: Have an album on iTunes “AutoPilot”, My rap name is Bdub$, and my favorite color is purple, and i like elephants, and love dogs 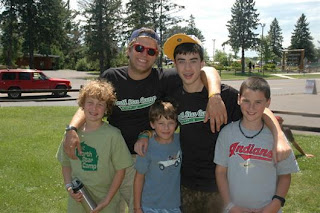