We’ll do our best to spare Craig Madigan comments about Lucky Charms and  leprechauns. He hails from Ireland, where he’s very active in sports and coaching. He’s attending the Limerick Institute of Technology where he’s studying business with sports management. He’s worked extensively with youth soccer teams, training and coaching. In my conversation with Craig, I learned that they actually refer to soccer as soccer, not football, the term that most other countries use.
Craig is eager to come to the United States. He’ll put his coaching skills to good use. While he will do some soccer instruction, his main activity area will be golf. We’re thrilled to have Craig on board for his first summer.
More About Craig:
Favorite TV show: Big Bang Theory
Best place you’ve ever traveled to: Old Trafford, Manchester- Home of the champions
Sports team(s) that you root for: Manchester United
How did you learn about North Star and why did you apply: Through Camp leaders
What did you do last summer: Worked to travel to America
What noteworthy/menial/random job(s) have you previously held: Worked in a Bookshop and Soccer camps
What, if any previous camp experiences have you had Just week long soccer camps in Ireland
If you had a super hero power, what would it be: Invisible
Best Christmas present that you’ve ever gotten: My football boots
Preferred chicken nugget dip: Plain please 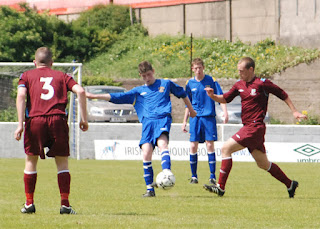