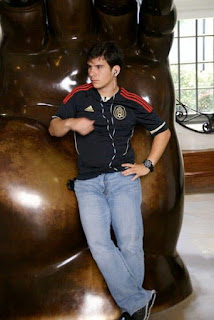 David Barrera comes to North Star from Monterrey, Mexico, where he’s studying international marketing. David has been a sporting guy since he was a kid, playing football, soccer, baseball and tennis. He’s also an experienced coach, having coached football for the Club Avispones. He created a summer camp program for Avispones.
David has been involved in camp, too. As a child, he went to Camp Olympia in Texas. His parents started a camp for kids on their ranch in Durango. David is a pretty diverse guy… he first took up waterskiing at the age of nine and has since taught friends how to ski and wakeboard. He’s also a guitar player and In fall of 2010, he was invited to audition for Berklee College of Music in guitar and singing. He was accepted, but he choose to go to business school and to leave music as a great hobby.
We welcome David for his first summer. He’ll be a cabin counselor and waterski/wakeboard instructor.
More about David
Favorite TV show: NFL Network, Friends, Person of Intrest, HIMYM, The Unit, ellen.
Best place you’ve ever traveled to: Hmmmmm… I’d have to say Vancouver, Whistler
Sports team(s) that you root for: New Orleans Saints (Who Dat)!, L.A. Galaxy, Barussa Dartmond, Detroit Red Wings and Real Madrid
How did you learn about North Star and why did you apply: By a web page my mother sent me. I’ve always loved summer camps. I’ve been working with kids along time. this year i wanted to get away to someplace, new, awesome, and fun. i think North Star is the perfect place to spend the summer and do something i love.
What did you do last summer: I went to south padre island with friends. and started a summer camp in our football club.
What noteworthy/menial/random job(s) have you previously held: I cleaned boats and jets ski one summer.
What, if any previous camp experiences have you had: I remember the last day of camp not being able to sleep cause i didn’t want to leave.
If you had a super hero power, what would it be: Flying! no contest hahahaha
Best Christmas present that you’ve ever gotten: A guitar
Preferred chicken nugget dip: Barbecue