Andy and I were at Michigan State University for our staff hiring, which is pretty cool because their career center is actually in their football stadium. We were hoping that we’d bump into MSU QB Kirk Cousins in hopes that he could convince him to be a counselor and football instructor. We didn’t see Cousins or any of his teammates, but Drew Vandegrift did stop by, and we’re glad that he did. A sophomore, Drew is studying Fisheries and Wildlife and has aspirations of becoming a Wildlife Biologist. He’s a big outdoorsman and doesn’t like sitting around for very long. He participated in lots of sports and ultimately focused on soccer. He’s also an avid long boarder
Drew and his friend Dan (who also will be joining us) are both big mountain bikers and told us how they liked repairing bikes tinkering with bike parts. Andy and I figured that in addition to maintaining our working bikes that Drew and Dan might be able to resurrect some of our previously declared inoperable ones. Drew will instruct biking and pathfinders but we also are looking forward to him being a big help on climbing.
More about Drew
Favorite TV show: Frozen Planet
Best place you’ve ever traveled to: Aruba
Sports team(s) that you root for: Arsenal
How did you learn about North Star and why did you apply: Through Outdoors club here at MSU. Well, I love the outdoors and North Star seems darn outdoorsy.
What did you do last summer: Camped on the Au Sable River, Longboarded 120 miles
What noteworthy/menial/random job(s) have you previously held: Mowing, Serving at Applebees
What, if any previous camp experiences have you had: Attended Spring Hill for a few years
If you had a super hero power, what would it be: To be able to “jump” (like in Jumper the movie)
Best Christmas present that you’ve ever gotten: My lovely Longboard
Preferred chicken nugget dip: honey mustard 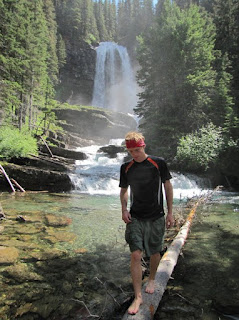