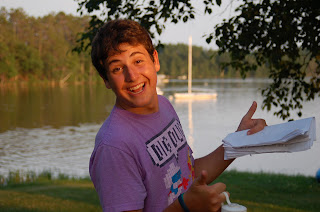 Our Counselors in Training play a unique role at North Star. These are the guys that were campers last year and now find themselves on staff. They are a tremendous asset as they not only bring energy and enthusiasm, but being not too far removed from their camper years, they bring a great perspective and understanding what its like to be a camper. We consider our CITs to be members of our staff, and most of the time, our campers don’t see them as “in training”, but just as one of their counselors.

We are excited to introduce you to our CITs over the course of this week. We kick things off with Jacob Baim.
Jacob returns for his seventh summer at North Star. Currently a sophomore at Highland Park High School, Jacob has been in several North Star theatrical productions. This is something that he does at school, where he’s active in swing choir, chorale and acting. He’s also been in school musicals, S.T.U.N.T.S. and short play festival. During his camper years, Jacob was a top notch archery and waterskiier, and he’ll instruct both at camp this summer.
More About Jacob
Favorite Tombstone pizza type: Pepperoni
Favorite project at camp (that you don’t necessarily instruct): Archery
Your three favorite movies of all time: Anchorman, The Dark Knight, and My Cousin Vinny
Preferred wanegan offering: Whatchamacallit
Best evening program at camp: Glen’s game
Favorite cartoon character: Spongebob Squarepants
Favorite camp (card) game: Euchre
If you could have lunch with any two people, dead or alive, who would they be?: Tina Fey and Nic Rouleau
What is your dream job: To be on Broadway

A little known fact about yourself: I write shows and music 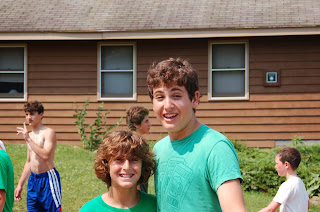