Add Jacob Cullen to the crew of counselors that we have from Winona State University (MN). He’s a senior at Winona  majoring in recreation tourism with an emphasis on nature tourism, and a minor in adventure tourism. He chose recreation and tourism  because he wanted to teach people but he knows that he couldn’t do it in the traditional classroom setting. He’s not a fan of sitting inside for long periods of time, so this major sounded and is perfect him.

Before Winona State, he attended Iowa Central Community College where he was a 2 sport-athlete in track and field and cross country. Jacob comes from a very large family. He has 5 brothers and 2 sisters ranging from the oldest being 28 and youngest turning 9 in October. He’s part Pacific Islander, on his father’s side. He absolutely loves being outdoors whether it’s just going for a walk or participating in a various array of outdoor activities and sports. Jacob was volunteering at the School of Recreation’s summer job fair at Winona and I made sure that he had his friend stopped by the North Star booth before they headed off to class. I’m not sure where his friend ended up working for the summer but we’ll make sure that Jacob ended at the right place! He’ll be instructing climbing and canoeing at camp this summer.

Favorite TV show: Lie to Me, River Monsters, and Scrubs

Sports teams that you root for: The Wisconsin Badgers, UNC Tar Heels, Brewers, Milwaukee Bucks, the Packers, and any team playing the Miami Heat

How did you learn about North Star and why did you apply: Summer job fair at Winona State, I thought it would be a good experience and always wanted to go to summer camp as a child, but never got the chance so I decided to try as a counselor.

What noteworthy/menial/random job(s) have you previously held: The most menial job I have ever had would be working at the printing company that I work out now. The most random noteworthy/random job would be when I sold books door to door out in New York in 2 summers ago

If you had a super hero power, what would it be: Telekinesis

Best Christmas present that you’ve ever gotten: When my cousins from New Mexico and Hawaii came to visit for a couple weeks 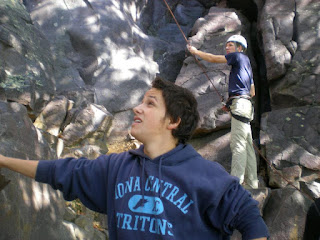