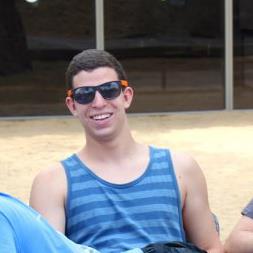 Returning for summer number eight is Jonathan Schack. He’s called several places throughout the midwest home. He was born in the Chicago area, lived in Milwaukee and then St. Louis, and now resides in Columbia, Missouri, where he’s a freshman at the University of Missouri.
Jonathan is active on campus as he is involved in his fraternity, AEPi. He’s majoring in journalism and hopes to go into film production. Camp is a family thing for Jonathan as his twin brother spent many years as a camper and counselor at North Star. His younger cousin, Daniel Bernstein, is one of our campers. We’re excited to have Jonathan back as a tennis and sailing instructor.

Favorite project at camp (that you don’t necessarily instruct): Arts and Craft because it is without a doubt the best place to just kick back and relax

Your three favorite movies of all time: Superbad, remember the titans, and the breakfast club

Preferred wanegan offering: Charleston Chew strawberry edition
Best evening program at camp: glens game
Favorite cartoon character: Hey Arnold because it is simply the best cartoon show of my generation
Favorite camp (card) game: Spoons
If you could have lunch with any two people, dead or alive, who would they be?: Aaron Rodgers and Kate Upton because Aaron Rodgers is the best football player of ALL TIME and because Kate Upton is my celebrity crush
What is your dream job: film producer
A little known fact about yourself: My first year as a camper when I was going into the 5th grade I cried hysterically because I was not put in the same cabin as my twin brother Jordan. After being put in his cabin because I refused to have fun if I wasn’t, I had the best summer of my life and have been attending North Star ever since