Max Emmerman is finishing up his senior year at Francis Parker High School in Chicago, IL. At school he’s the captain of the golf team. He also plays tennis and he’ll be instructing both of those this summer at camp along with some disc golf. In the fall he’ll be down in New Orleans at Tulane University and he’s been buying lots of shorts because it is going to be so hot down there. He’s been doing a lot of work for college next year and have been trying to finish his senior year with decent grades.
The tennis season at Parker just finished up and my team did great.  He played singles in sectionals, but  lost in the first round.  The other singles player on his team made it to state but lost in the second round. A second generation camper, Emme is also a big Green Bay Packers fan. We’re thrilled to have Max back for his ninth summer.
More About Max
Favorite Tombstone pizza type: Pepperoni
Favorite project at camp (that you don’t necessarily instruct): Speedball
Your three favorite movies of all time: Happy Gilmore, Pulp Fiction and Mad Max
Preferred wanegan offering: Skittles
Best evening program at camp: Glenn’s Game
Favorite cartoon character: Roger (from American Dad)
Favorite camp (card) game: War
If you could have lunch with any two people, dead or alive, who would they be?: Jerry Seinfeld and Kenny Chesney

What is your dream job: Manager of a successful European soccer team


A little known fact about yourself: I can flip my eyelids inside out, and I make mean scrambled eggs 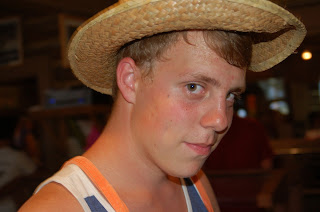