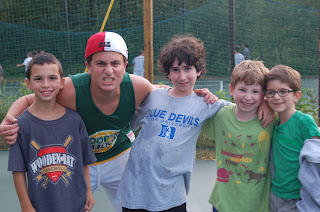 Nick Kasle hails from River Hills, WI where he is a senior at Nicolet High School. Nick returns for summer number seven and brings his great sense of humor. Nick is on his school’s tennis team and at camp he can be found in a multitude of areas, on the waterfront at waterskiing, in the arts and crafts.
Nick also enjoys Larping (or Live Action Role Playing). As a matter of fact, Nick has his own larping sword (totally safe) that he occasionally will bring out for some entertainment. He has been attempting to form a larping squad at his high school, and we have faith that Nick will be successful! We’re thrilled to have him back at camp this summer!
More about Nick Kasle:
Favorite tv show:  Avatar the last air bender
Best place you’ve ever traveled to: the Galapagos Islands
Sports teams that you root for: Packers, Brewers

If you could have a superpower, what would it be: To have one wish that will automatically come true, then wish for a 1000000000 wishes.

Best Hanukkah gift you ever received:  Game cube when it was cool
Preferred chicken nugget dip: whatever suits my mood.