This is the morning after report for Mike Storm’s wedding that Leb, Dan, Andy and I attended.  Mind you after 5 days of shooting pain through my mouth and ear, I went to Duluth in the morning and had a root canal.  Still with lip drooping we headed to Hastings, MN for the wedding least I’d be accused of rather having a root canal than attending Mike’s wedding.  You know he would have made that joke.  Upon arriving to the Schaar’s bluff a beautiful park overlooking the Mississippi River we see Mike shirt flapping open making final preparations.  He stayed like this until 15 min prior to the ceremony.  Robert said to him:”Don’t you think you should get ready?”  Mike looked at him like:  “Don’t marsh my mellow”.  Kathy had strewn games ie. crochet (which Leb beat me by a hair) and frisbees throughout the grounds.  The theme for the wedding was bicycle built for two and Kathy found a cool old two seater that she made into a floral display by adding a basket.  It was 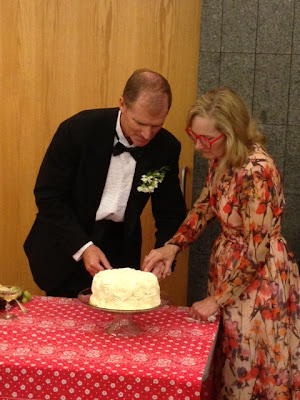 beautiful.  The catering crew for the picnic was family and friends.  Cakes were made by Kathy and a neighbor.  I couldn’t get a picture of Kathy but she was glowing in a floral full length gown.  Mike signaled the opening of the ceremony which was held in the lovely visitor center along with dinner, with some notes on his horn.  Mike’s band had their final performance at the wedding and when Mike wasn’t getting hitched he was playing with the band.  Who knew Kathy plays the flute?  She and Kathy(Mike’s bandmate) surprised Mike by playing a medley of a bicycle built for two and other love songs on their flutes.  For awhile it was the Kathy and Mike show when Kathy joined her church choir to sing a toast.  Not a dry eye amoung the NSC crew when they exchanged their vows.  Mike was worried he wouldn’t get through them since tears of joy would spring up throughout the night.  Leb, Andy and I were suffering the same condition.  He managed to get his beautiful words out without too much trouble as did Kathy.  Mike sister was the officiant and she wove the bicycle theme through out the service brilliantly. Mike stopped his sister cold when she forgot to introduce a musical interlude for he and his band.   Mike’s niece a journalist and Kathy’s son a Dr. of Philosophy both read their missives about the union that were so moving they should go on the road and perform marriages.  At the very least publish.  Instead of rice, bubbles were blown.  At the end of the ceremony Mike came to our table and said “Leb I have no idea how to get the toasts started”.  He was hemming and hawing until Leb finally picked up on the idea that he wanted him to start the toasts.  Leb started it off talking about the 25# Mike loses every summer playing non stop tennis, doing raps and making popcorn.  Andy followed saying he didn’t think it was possible for Mike to be happier until he saw him with Kathy and how amazing it was that Mike actually found a woman that would tell jokes with him on stage.  It was easy to pick out the Storms family among the crowd.  They look like Mike and share his happy go lucky approach to life.  All are musical including mom and all tell jokes.  Mike’s mom is 85 and a dish.  She played piano and her granddaughters sang their traditional song for grace.  The sunset was perfectly timed and the moon was rising as the s’mores in the outdoor fireplace were offered.  Who could make room for anymore sweets.  Dan commented that you could tell it was Mike, the dessertatarian’s, wedding since half the table was desserts.  To add to the fun Andy found seven degrees of separation with Mike’s niece who thought he looked familiar.  It tuned out that they both sat together in Journalism classes at Northwestern and both had newborns.