Sunday was a big day here in the Northwoods. Not only was it the conclusion of the Lumberjack World Championships in Hayward, where Jason Wynyard took home another title, but it was also the Green-White Egg Marathon and Elections to choose the President and Vice President of the Great and Glorious North Star Party! This weekend was also the second of our Rookie Weekends, and we are very thankful to the many guests who made the trip up to camp to see what North Star is all about.
Here’s the recap:
The Green-White Egg Marathon
An event like no other, the Green-White Egg Marathon is a relay race around camp comprising of every imaginable camp activity. After each team completed over 40 events a piece, they tagged their last two teammates who were chosen to build the fire for “Boil Water Boil,” a race to see which team can get their Number 10 tin can to boil over first. 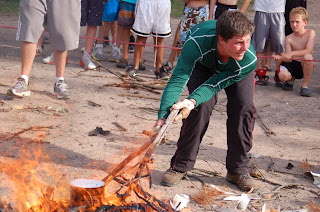 To complicate matters, each team must carry a raw egg with them throughout the entirety of the race. Whether they are shooting archery or climbing to the top of the wall, they must do so with the egg carefully stowed. At several check points, the teams had to prove to the judges that their egg was in fact intact. If the egg was cracked, a member of the team had to return to the porch of the office to collect a healthy egg.
The egg’s final destination was in the Number 10 tin can of Boil Water Boil, and the victorious White Team feasted on their hard boiled egg after the conclusion of their fire. It was a tight race with several lead changes and two great fires at the conclusion.
Elections
Every year at camp, we let politics creep into camp to elect a President and Vice-President of the Great and Glorious North Star Party! Unlike real politics, things here remain quite civil and we don’t have to worry about the Camp Council’s debt ceiling. 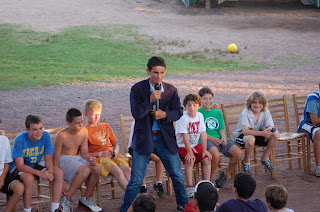 Instead we worry about very pressing issues such as the cereal selection on the breakfast bar to exploring teleportation as an option to make the camp program more efficient.

The candidates are vying for these positions so that they can represent the camper base at staff meetings, and most importantly switch places with Leb and Dan respectively on Camper Counselor Switch Day coming up in the last week of camp. Candidates from our young Juniors to our Pine Manor campers went cabin to cabin campaigning, put up signs around camp, and even petitioned for their spots on the ballot. When all was said and done, the Pine Manor tandem of Lucas K. and Andrew R. emerged victorious and will represent the camper base going forward during their term.


Lumberjack World Championships
In other news, our Pine Manor campers headed out on Saturday Night to catch a night’s worth of action at the Lumberjack World Championships. The boys got to meet Jason and Karmyn Wynyward, the King and Queen of the Lumberjacking World. The couple from New Zealand has consistently dominated the competition, and Jason made an appearance at North Star in 2009 when he gave a tutorial on sawing and chopping. The North Star crowd has consistently made up a loud cheering section for Jason and he came over to greet his fans afterward. The boys had a blast. 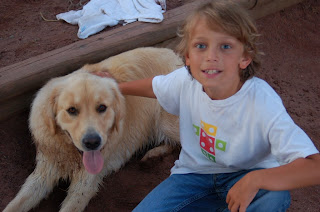 In addition to these major events, we have a tone more coming. We are making preparations for Pow Wow Day, the Guten Gallop, Espionage, North Star Ball, Glen’s Game, Predator and Prey, the Dodgeball Extravaganza, Casino Night, Camper Counselor Switch Day and more. We’re over half way through our second session, yet we still have so much to do! We’ve had a great session thus far with so many new, young campers settling in and making friends, and learning to call North Star their second home.