One of the things that we try to do at camp is to instill the importance of the world community that we work in. We’d like to believe that United Nations Day at North Star is one of the ways we do that, but in reality, UN Day serves as one of the cornerstone special programs of first session.

Planning for United Nations Day actually began about about a week ago and culminated yesterday. It started with captains being announced, teams being put together, and then each team practicing over the course of the week the three main series of events. The chief goal of the day is for our campers and staff to display good sportsmanship and have a great time, and while the games can get exciting, this focus remains. The day is split into four main series for campers to participate in, with each series having a wide variety of events, from softball and soccer to table tennis and four square. The day is packed with lots of excitement and as soon as one series of events is over, its time for the next one. 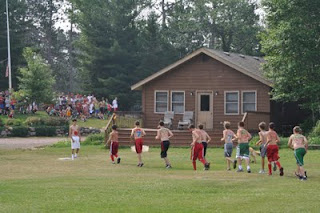 Opening ceremonies of UN Day are a great North Star tradition. Once each team has their final cheer, the captains run a torch from the council ring to light the NSC cauldron next to the flagpole. Our UN Day proclamation, written many decades ago by Jack Weiner was read by counselor Ben Mizel and was then signed by the 12 captains. 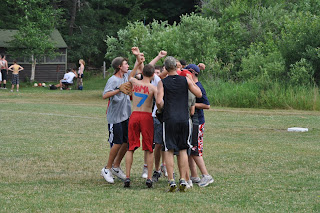 Each UN Day has its own set of highlights…both on and off the field. The morning saw lots of exciting games, from a junior football game that went into double overtime (they used college overtime rules) to a softball game that would be decided by a number of hits tiebreaker. Both curtain ball and four square are always full of excitement as participants implore to referees that there was indeed the proper amount of arc on their throws.

After lunch, our staff play a speedball game (a hybrid game that combines elements of soccer, football and basketball). This may be the most important result of the day as the winning team gets to eat dinner first. Our excellent kitchen staff works hard all day to put out quite the spread, with the cornerstone item being deviled eggs.

One of the changes we made this year to UN Day was to move our final series, the swim meet to after dinner. This actually happened by accident last year as some late afternoon rain caused us to delay the swim meet, and we realized that it actually ended the day with a lot of excitement as the entire camp went down to swim point after dinner to cheer on their teammates. By the time the day is done, the final scores are pretty immaterial as everyone is ready for bed, however this year there was quite a bit of excitement. The team of Mali was in 4th place when lunch time scores were read, and as is tradition, their cheers ended with the “4th to 1st” exclamation. Well… their cheer was nearly realized. Mali’s team members didn’t give up and they were able to put on a late afternoon and then a great swimpoint run, and managed to finish the day in 2nd place, just 6 points behind the day’s victor, Malta.

Reading of the final scores is one of Leb’s true enjoyments. While he insists that he doesn’t stall, it sure takes him a lot of time to get the final scores. Adding to the stall was one of the better “Big Ten” fakes in quite some time. At North Star we honor our ten year men and women with a roast where guests are present, however the date and time of the Big Ten is always a surprise and we do our best to have a few “fake” Big Ten announcements. In typical style, we’ll load up a van with several staff members who get dressed up in costume and create a lot of hoopla. Most of these staff members, however, all thought that it actually was the Big Ten as they were sure that a second van following them was filled with all the Big Ten guests. Unfortunately for them, the van had no guests and they’ll all have to continue to guess when the Big Ten will actually be.

As expected a great day was had by all… the teams of Japan, Malta, Mali and the United States displayed fantastic sportsmanship along with some great face paint designs. 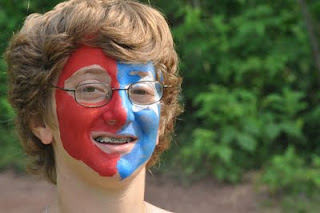