Tonight, the whole camp gathered by village for our first village campfires of the summer.  As is tradition, the entire Junior Village played a game called beach flags. 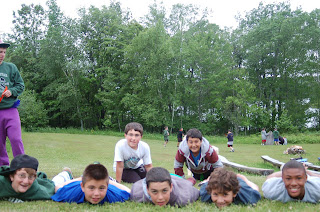 Beach flags is a game where the campers lie down and feathers are placed behind them.  One less feather is placed than campers present, and thus, after each round, one camper is eliminated.  The goal of the game is to be the final camper standing.  First, each cabin played their own game; next, these winners represented their cabin in the final Junior Village match.  When the dust settled, Clarence W of J2 became the winner. After beach flags, the entire Junior Village joined together in the making and eating of some tasty s’mores.

The Intermediate Village kicked off their campfire with a game of Svetlana ER. At this point, you’re most likely thinking to yourself, “what in the world is that?!” And with good reason. 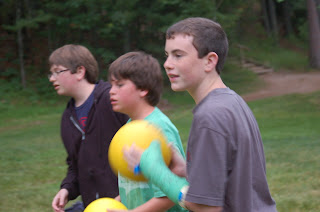 It is a combination of dodgeball, bocce ball, and chaos that combines for a ton of fun. The game is truly proof of what a blast the kids have as a result of the creativity of our staff.  The Ridge sang some songs and finished up with s’mores as well.

Cabins S-1 and S-2 had a Senior Village Campfire of their own, which featured some stories from their respective trips and some campfire games. And of course s’mores. On the whole, the Village Campfires help to build a great sense of community and show off the talents and creativity of our guys!