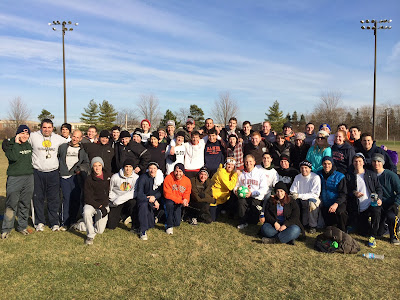 For most, Thanksgiving week is a time to get together with family and friends, eat a lot of food, and perhaps take advantage of Black Friday sales. A lot of people have a traditional “Turkey Bowl”, an annual football game played at a local park with friends. At North Star, we’re proud of our “Wanegan Bowl”, which has become a yearly rite for many in the Chicago area.
Some history… Ten years ago NSC Alum Brian Glickman came up with the idea of getting a group of camp folks together the day after Thanksgiving for a game. Instead of football, however, we decided on a camp game called speedball (a combination of football, soccer and basketball). The first year we got a small group together and played in the snow at West Ridge Park in Highland Park. Anyone that is of Pine Manor age or older during the previous summer and is a current or former camper or staff is encouraged to come out and play. Over the years we’ve seen the group grow to nearly 60 split between four teams.
We are looking forward to continuing the Wanegan Bowl for many years to come. We’re even considering splitting into a “Seniors Game” and “Juniors Game” for the benefit of those who are a few more years removed from their camp days. The game is a great time for camp folks to work off some Thanksgiving excess, but also to see camp friends and enjoy the company of other members of the North Star family.