As usual, our boys rose to the occasion! With the Fourth of July social being moved from Birch Trail to North Star on very short notice, our guys buckled down and put together a fantastic social. The Friday night storm forced the social from Birch Trail to the shores of Spider Lake, which was the perfect lead-in to our Wizard of Oz theme and our tagline: “We’re not at Birch Trail anymore!” 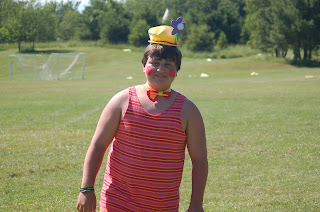 The girls arrived in the afternoon to find the Lolly-Pop Guild ready and waiting. Our Junior Village campers opened by serenading the young ladies in their best munchkin voices, before Glenda the good witch lead them along our Yellow Brick Road.

Along the way, they ran into the Scarecrow, the Tin Man and the Lion before the real excitement began. On their way up to the Emerald City (Council Ring), the group ran into the Wicked Witch of the West (Sue), who put on an Academy Award Winning Performance in her theatrical debut. But she wasn’t alone as our Senior Village Flying Monkeys came cascading out of the woods. 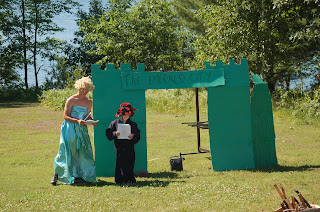 Then it was our Intermediate Munchkins who saved the day by dousing the Wicked Witch with water and causing her to melt. They proceeded up to the Emerald City where our cast of characters begged for their respective Brain, Heart, and Courage from the Wizard himself. Leb’s voice boomed loudly through the Emerald City telling them all to go on their way before they revealed the true identity of the Wizard – J-1’s very own Jack S! He then announced that he would grant all of the Dorothy’s their wish to go home, but not until after a great social.

And a great social it was! After the skit, everyone went straight into icebreakers and name games to help get to know one another. From there, they were released into an organized free. We had a great picnic dinner with hot dogs and brats, fruit salad and pasta salad, and the traditional red, white and blue bomb pops for dessert.

The girls took their turn to make a scene as well by preparing an all camp Flash Mob! They pulled it off before we started dinner and they caught everyone by surprise. It was quite impressive. And that was only the start of the dancing. After dinner we had a dance party in Mike Hall. While some danced, others played basketball, ultimate frisbee, or attended a rocket launch out on the athletic field. It was a great night and we look forward to being back at Birch Trail on July 4, 2012.