Yesterday was our first Cruiser Day of second session, and it was a great one. Cruiser Days (typically Wednesdays) are a cabin day where each cabin group puts together their own plan for the day. The day starts with doughnuts and ends with a cookout dinner over a campfire, with lots of fun in between. The cabins can choose from all the activities around camp, and they get creative with more as well.

Each cabin takes one Cruiser Day as a Village where they go on a field trip together. Yesterday was the Junior Village Cruiser Day, and it was a great one. The boys headed over to the Hayward waterslide and mini golf for a morning of fun. Camper estimates had the speeds on the waterslide clocked at 120 miles per hour on the “best waterslide ever” – I guess they’ll have to work on math when they get home!

From there the boys headed over to the world famous Hayward Lumberjack Bowl for a show and demonstration. 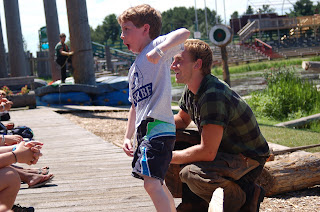 Campers and counselors alike joined in to support their favoirte Lumberjacks with the customary cheer of “Yo – Ho!” The boys watched as the Lumberjacks competed in the underhand chop, the springboard chop, log rolling, boom running, speed climbing, canoe jousting and more.

At intermission our mini-Lumberjacks were able to try their hand and the double buck saw with the help of the real Lumberjacks, many of whom will be competing in the Lumberjack World Championships here in Hayward in just a few weeks. Even though they dwarfed our little guys, the boys got right in there and sawed away. 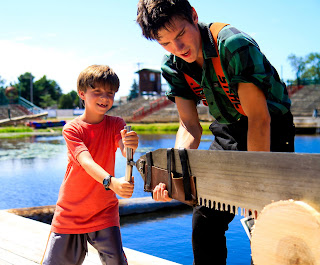 After the show, the boys headed to Hayward Beach where they had their cookout dinner. 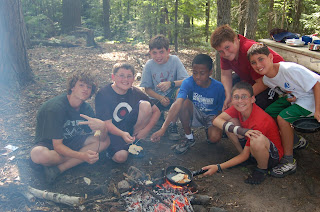 Meanwhile back at camp, the Intermediates and Seniors prepared their dinners at their campfire sites. Last night’s dinner was Tin Foil Surprise, where you take hamburger patties, potatoes and vegetables and wrap it in tin foil and cook it over the fire. The result is a delicious dinner! And s’mores for dessert to top it all off.
It was a great Cruiser Day and we’re looking forward to two more fantastic ones.