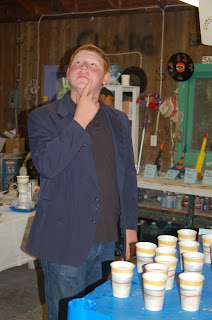 Its the Big Ten for Michael Berger! Michael returns as one of our junior counselors and we’re looking forward to roasting and telling some great stories about Michael and his fellow ten year men! A native of Chicago, IL, Michael is a senior at the Latin School. After camp, he’ll head off to Washington D.C., where he’ll be a freshman at American University.
At school Michael is on the volleyball team. He also helps run the A.W.E.S.O.M.E Club, which helps raise money for the Northwestern University Brain Tumor Institute. He’s also part of a sketch comedy troupe at school. At camp Michaell will be instructing riflery, arts & crafts as well as theater games.
More About Michael
Favorite Tombstone pizza type: Pepperoni
Favorite project at camp (that you don’t necessarily instruct): Theatre games!
Your three favorite movies of all time: Caddy Shack, Animal House and   Fight Club
Preferred wanegan offering: When I was younger I would have said Reese’s, but as of late I have begin to go for take 5.
Best evening program at camp: The camper show and Friday night services
Favorite cartoon character: Homer Simpson
Favorite camp (card) game: Euchre
If you could have lunch with any two people, dead or alive, who would they be?: I would have lunch with Bill Murray and Teddy Roosevelt
What is your dream job: A writer for Saturday Night Live
A little known fact about yourself: I am double jointed in my hands. It is gross